Thank you to everyone who came out for our June 14 giveaway.  We served 151 people, nearly triple the turnout from last month (which was low because of the storm). 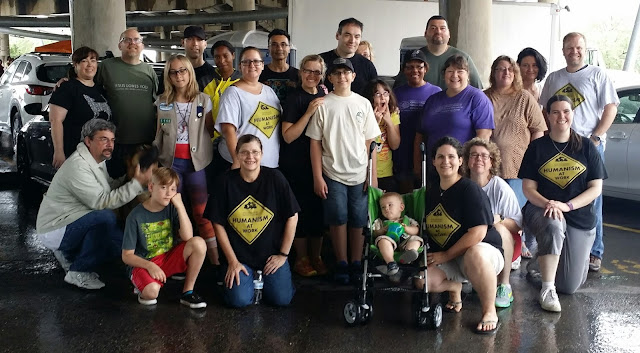 Our friends from St. Andrews joined us again this month to lend a hand (thank you!), and we received a generous donation of 144 boxes of Girl Scout cookies from the Springwood Service Unit, Troop 1113.

For anyone that would like to support our efforts, we have become critically low in our supplies of our most popular items.  If anyone is able to contribute, it is certainly appreciated.

We look forward to seeing all of you again on July 19th next month!

Have you ever thought about the circles that you draw around yourself?
It’s one of the most common human behaviors, but I wonder how many people stop to think about it.  Consciously or not, we gravitate toward people most like ourselves: same gender, same skin pigment, same nation of origin, same beliefs or values, same hobbies, etc.  And this can be a positive thing, such as fans of a particular author gather to discuss their favorite book.
But history has shown us that this behavior can have very unfortunate consequences, also.
Whenever a circle is drawn around a particular group or identity, there are always people outside of it.  And some circles are drawn with such boldness, such conviction – that those outside it are vilified, shunned, “othered”.  Such circles can become a prison of the mind, an echo chamber of group-think that may never be escaped.  Many circles set themselves as enemies of others, leading to all manner of tragedies: wars, genocide, racism, laws that favor one group over another, biased job hiring practices, and countless others.
What I am talking about is a lack of empathy.
Do you want a better world?  Then keep the borders of your circles “fuzzy”, or as permeable as possible.  Find where you have made your own circle, and reach outside of it – embrace others who are not like you, and draw them in if you are able.  Perhaps with effort, you can expand your circle and identify with nearly everyone you meet.
And maybe one day we can erase our circles, and let our identity be humanity itself.
Award-Winning Service!